Lucky Sunday for Some at Road Atlanta Hoosier Super Tour 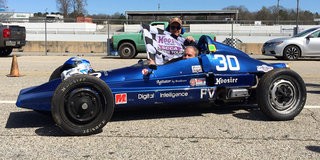 After being unable to hold the Super Touring® Under (STU) lead Saturday, Paul Azan made good Sunday.  David Brand, Saturday’s STU winner, had the class lead early in his Lotus Exige. But Azan, driving the No. 173 Active Autowerke/Toyomoto Sales/AEM BMW 328, hounded Brand early and grabbed the lead before the race’s midpoint.  He then drove the car solidly to a victory.

“We learned a lot yesterday after looking at video as to certain areas on the track where we were losing a lot of speed,” Azan said after the race. “David and I race really clean. We had one unfortunate bump in the race. However, the racing has been extremely good. Today, the car handled great. We made all the right decisions.”

In Touring 4, Nick Leverone did battle at times with Bryan Horowitz and Raymond Blethen throughout the event. But Horowitz’ Scion FRS and Blethen’s Mazda RX-8 couldn’t get the better of Leverone who brought home the Sunday win in his No. 186 Flatout Motorsports Subaru BRZ.

“It was a great race,” Leverone said. “All the competitors were super quick this weekend, and there were a lot of us at the front. This class is growing and it’s really good. There are a lot of different makes that are capable of winning. Should be fun for the rest of the season.”

Three Formula Vee® drivers had some fun Saturday as Donnie Isley, Stevan Davis and Laura Hayes left onlookers wondering until the last moment who would reach the finish line first. Davis, driving a Racer's Wedge SB-1, and Isley both took turns leading the race, while Hayes sat third in a Caracal D Silver Bullet.  Coming through the last corner on the last lap, Davis looked to have a slight advantage. But Isley, who left Saturday’s race after one lap, had the momentum and only just got the win in his No. 30 Digital Intelligence Agitator 016 racecar.

“Once again, a three-way battle in Formula Vee. I think you could’ve flipped a coin and any one of the three of us could’ve won,” Isley said.

The Formula F event produced a surprise winner after Simon Sikes jumped to an early lead in his Mygale SJ13 Honda. But Sikes soon fell back and Saturday’s winner, Tyler O'Connor, moved to the front and established a solid gap on the field in his Mygale SJ15 racecar.  Behind the leader, a battle for the runner-up spot was raging between Joe Colasacco, Ayrton Ori, David H. Livingston Jr. and Burton Kyle August. Colasacco, in his No. 5 Rive Bistro/Auriana Racing Van Dieman FF, emerged from the battle and was on his way to a solid second-place finish when, with the race winding down, O’Connor pulled off the track with a problem -- gifting the win to Colasacco.

“I was pretty fortunate today,” Colasacco admitted. “The leaders got away and I was just hoping to stay in third. It’s unfortunate for the top runners that they both went out. But I finished the race in the right spot, I guess.”

Perhaps no surprise, Spec Miata’s cream-of-the-crop, consisting of several Runoffs® champions, also generated an exciting event that any number of challengers could’ve won.  During the 19-lap race, drivers such as Preston Pardus, Jim Drago, Danny Steyn, Tyler Kicera, Jared Thomas and Chris Haldeman all ran up front in the lead pack. Thomas led a handful of laps early with the help of Steyn, who also led a couple laps. Drago took a turn up front before Pardus led the last third of the race and came home a winner, by only .198-second, in the No. 42 Danus Utilities/East Street Racing/5x Racing/ PR Mazda Miata.

Luck again played a role later Sunday during the GT-2 race. Saturday winner Barry Boes, driving a Ford Mustang, was leading the class. Meanwhile, longtime SCCA racer Tom Patton was charging through the field in his crowd-pleasing No. 50 Hoosier Tires/RedlineOil/Carbotech Sunbeam Tiger. With Patton on his tail, Boes’ car suffered a mechanical issue and he pulled off track. Patton went by and on to the GT-2 victory after starting fourth in class.

“I put my head down and was just chasing down Barry,” Patton said. “My car was hooked up today. It’s a great start to the year.”

The Hoosier Super Tour will now take a weekend off before heading to the rolling Osage Hills of North Eastern Oklahoma for a March 30-31 event at Hallett Motor Racing Circuit. Follow all the action live from the 1.8-mile, 10-turn track at www.scca.com/live.